Welcome to our Future CFO 2019 analysis which updates and expands on our 2018 report and looks at the demographics of the main board CFOs or equivalent of FTSE 100 and 250 companies. We have looked at gender, age, tenure and nationality. In response to feedback from last year’s work, and to shed light on succession planning and the pipeline, we have looked at the appointments made by year and the career pathways.

It is encouraging to see that female CFO appointments since our last report are at an all-time high. We also note that the majority of CFO appointments are to external candidates, with the highest proportion being to CFOs from other companies. Given that the minority of this established CFO population is female, in an effort to increase the pool for future female CFOs, we will look to offer advice on how organisations can prepare the pipeline of female talent to be fit for purpose in the forthcoming years.

The CFO market remains an active one and, with the multiple priorities facing boards, the role continues to evolve and expand. More generally, we will encourage organisations to offer breadth of experience to those in the pipeline and with CFO potential. Rachael Erskine, Head of CFO Practice.

Profiles:
Gender: 17% of this group are female compared to 5% of CEOs and 13% of other EDs. This represents a significant increase from last year (11%) driven by the fact that 31% of CFO appointments in the year to date have been female candidates. This represents an all time high.

Nationality: 84% of the population is British. 19% of female CFOs and 15% of male CFOs are foreign nationals.

With the spotlight on gender diversity in the executive ranks, and with there being a healthy female population of senior finance talent, we recommend that organisations develop this talent pool to be CFO-ready.
For example, sponsoring broader experience across valued expertise, such as capital markets, P&L leadership, board exposure.

Pathway to the CFO Role:
We are interested in the pathway to CFO roles. We noted:

Female CFO appointments are at an all time high. It is encouraging to see more women in executive director roles.
This may also offer pipeline for CEO roles. 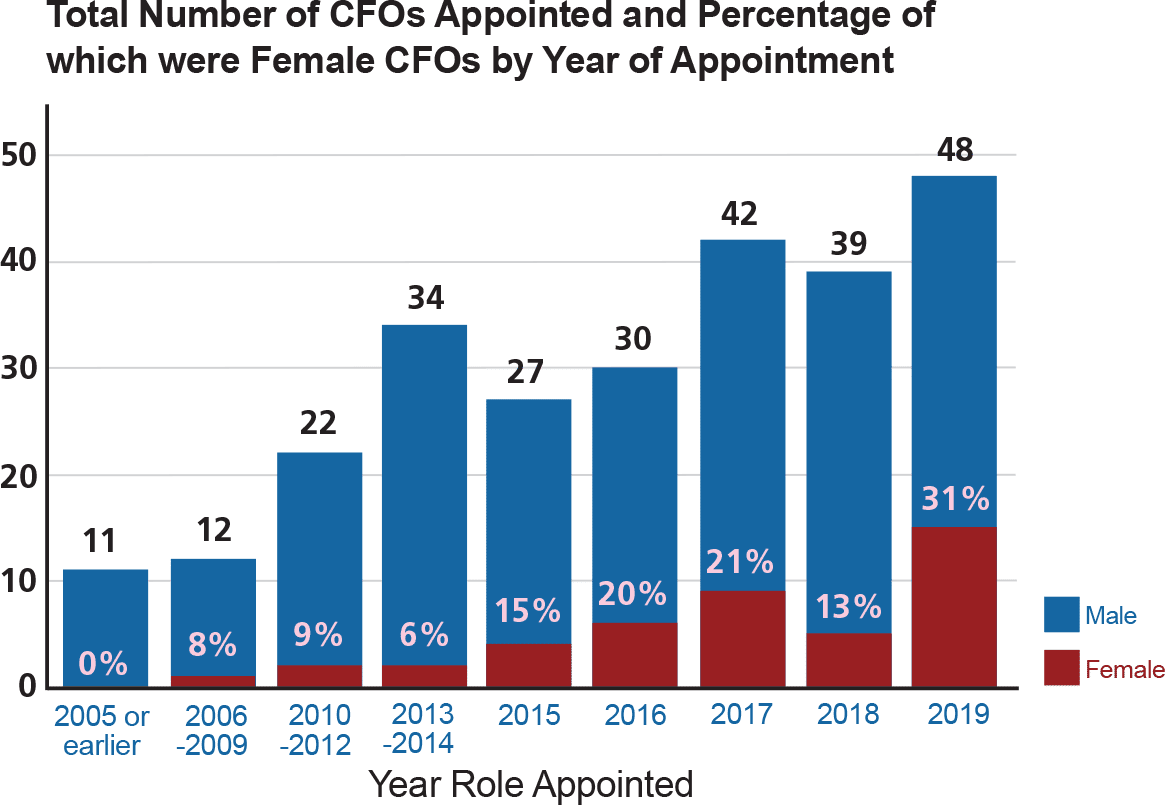 Gender and Age
17% of this group of CFOs are female. This compares to 11% of all FTSE 350 Executive Directors (5% of CEOs were female, 13% of other EDs) and 36% of all FTSE 350 Non-Executive Directors. We would like to see this percentage continue to increase. Given that, as of now, there are relatively fewer established female CFOs, we encourage organisations to consider appointing ‘first-timers’ who have the necessary skills and potential if this percentage is to continue to increase.

There were some differences in gender by sector, the lowest proportion of female CFOs being in energy, construction, manufacturing (12%) and consulting, media, healthcare (13%), compared to support services, consumer goods/services (21%) and financial services (22%).

As a result of these historical differences in appointments, whilst 7% of male CFOs are age 60 or more, there are still no female CFOs age 60 or over in this group. By comparison, 26% of FTSE 350 Audit Chairs are female with 30 females aged 60 or over. Similarly, 40% of FTSE 350 Company Secretaries are female, with four being 60 or over. 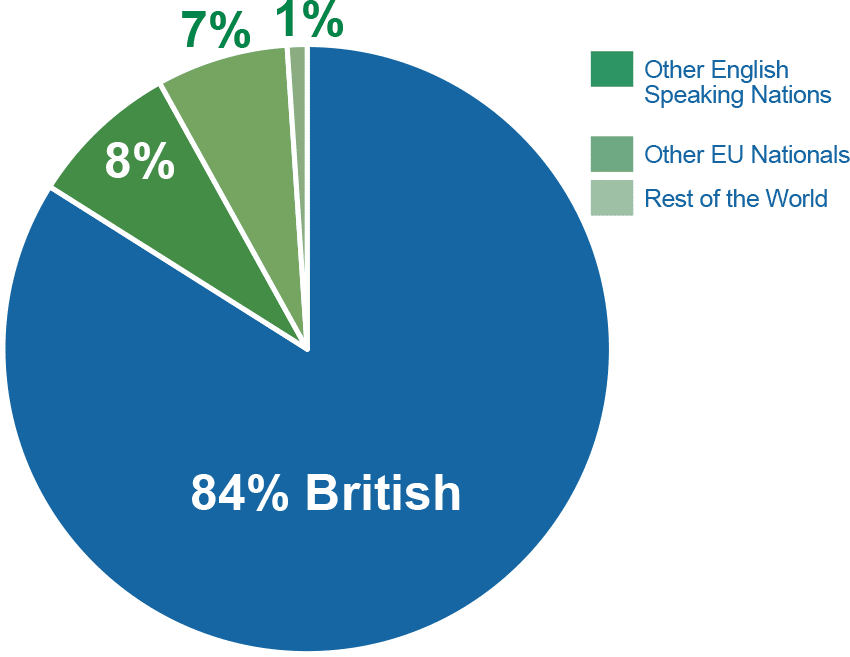 19% of female CFOs and 15% of male CFOs are of other nationalities (based on nationality data available for 249 CFOs).

As we found last year, the highest percentage of other nationalities are from the developed English speaking nations (8% comprising six Irish nationals, six South African, five US and three Australian). 7% were other EU nationals (including four Dutch, four French and two Italian), with 1% (three CFOs) having other nationalities. 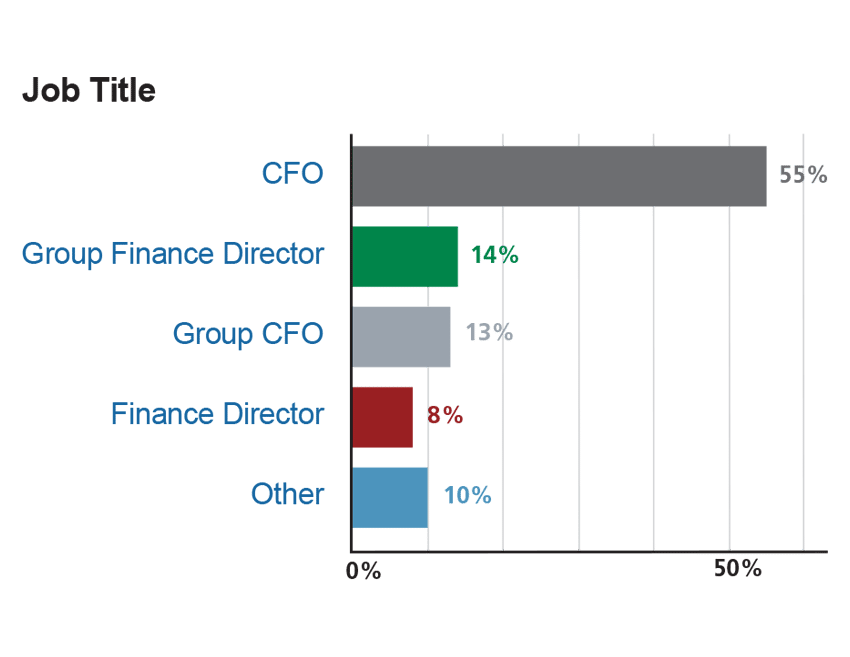 Tenure and Job Title
The average tenure (length of time in their current position) is 4.2 years. 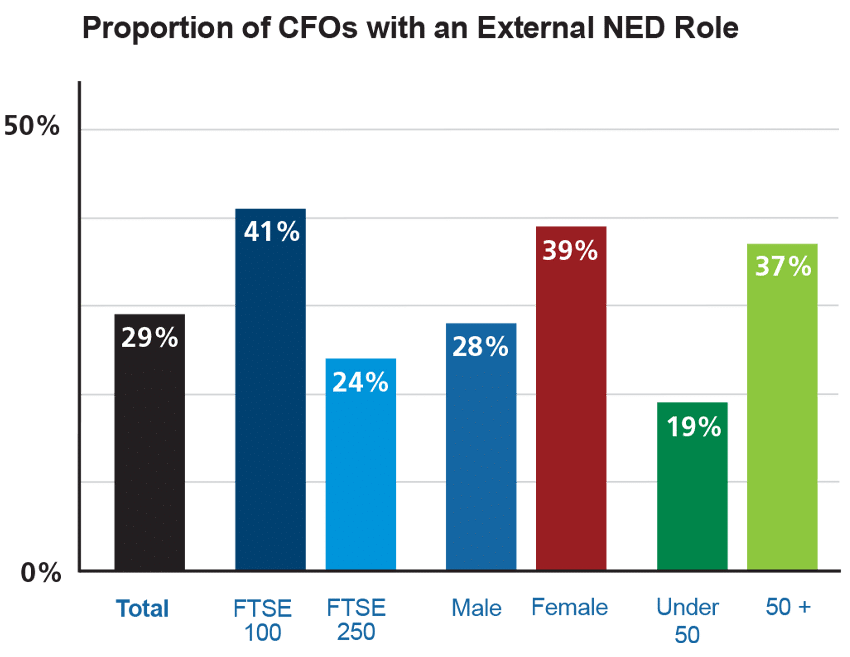 Other Roles
29% have at least one external NED role (defined as holding a NED role in a company other than the one
they hold a CFO role in). This is a slight decrease from last year (31%).

Perhaps due to the influx of new female CFOs the proportion of female CFOs with an external NED role is now lower than it was in 2018 (when it was 50%).

CFOs remain predominantly British, more so than other Board positions, with 70% of FTSE 350 CEOs being British.
Many female CFOs comment that they are regularly approached to take on NED positions. However, given that many of them are newer to role, and with shorter tenures, they may not yet have the capacity to take on such a role.

Analysis: Pathway to the CFO Role

Previous Role
Our analysis looks at the role CFOs had when they were appointed to their current ED position (see Methodology for further details). 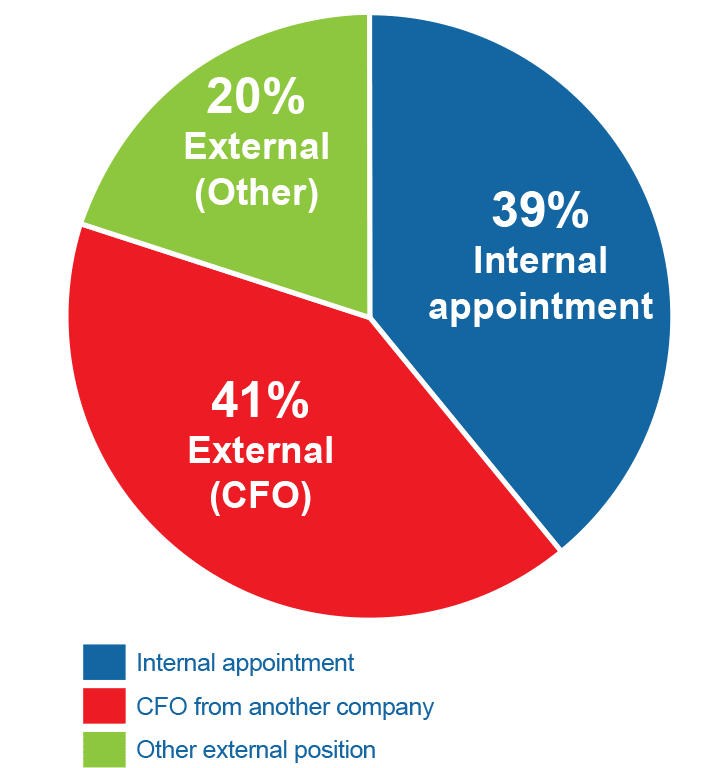 This represents an increase in internal appointments from 34% in 2018.
The average external candidate has been in position for 3.7 years, compared to 5.1 years for internal candidates.

Those CFOs who had moved to their current position from another company fell into three broad categories, as
shown in the table below.

Just over half (55%) of all external appointments to FTSE 100 companies were from other FTSE 350 companies compared to 41% for FTSE 250 companies. The chart below shows the type of company CFOs moved from.

Of the 161 external candidates, 35 had a previous role in a smaller FTSE listed public company (four FTSE AIM, 12 FTSE Small Cap, two FTSE Fledgling and 17 from other public organisations). This underlines the obvious importance of PLC skills in FTSE 100 appointments. It is interesting to note that more than a third of FTSE 250 appointments come from unlisted companies.

The majority of CFOs were external appointments. Those promoted internally tended to have been in position for longer. This underlines the value of prior experience in the number one seat.

Just over half (56%) of all the 161 external appointments were to candidates from the same or similar sectors. This was similar to 2018 (55%) and ranged from 71% in financial services to 47% in consulting, media, healthcare.

FTSE 100 companies were marginally more likely to appoint an internal candidate (42%) than FTSE 250 companies (38%). This difference is not as significant as we might expect, given the size and breadth of leadership talent in larger organisations. This may be due to the lack of external profile and/or reputation of internal candidates.

Gender
41% of female CFOs were appointed from a previous CFO role and 14% were appointed from a group finance role (compared to 52% and 10% of males respectively). This represents a significant increase in the proportion of female appointments from previous CFO roles compared to last year (up from 23% in 2018) suggesting that there are improvements in the female CFO pipeline. It also suggests that organisations will consider appointing a ‘step-up’ female candidate more readily.

These CFOs are similar in terms of age (mean age 50) and sector spread to the 265 main board CFOs analysed in this report. They have been in position for a shorter length of time (3.3 years); only one is female (4%).

Financial service companies were the least likely to appoint a CFO from a different sector. This is not surprising given the demands of the regulator and the relative attractiveness to candidates acquainted with the associated dynamics of the sector.

AIM, Small Cap and Fledgling CFOs
This year we have undertaken a separate analysis of CFOs of the smaller FTSE listed public companies. This covers a total of 680 CFOs in 526 AIM companies, 120 Small Cap CFOs and 34 Fledgling companies.

Compared to the FTSE 350 CFOs this group is:

CFOs in smaller FTSE listed public companies are more likely to be British and male in comparison to their FTSE 350 counterparts. This might
suggest that the smaller companies are less likely to broaden or formalise their search when appointing a new CFO.

Data was extracted on the 1 October 2019 from BoardEx: The Board & Management Intelligence tool  https://corp.boardex.com). 88 FTSE 100 and 177 FTSE 250 companies have been included giving a total of 265 board level CFOs or equivalents.

The 85 companies excluded from the analysis include 62 funds or similar with no CFO and 23 companies where the CFO/FD was below board level.

The 2018 data has been updated to exclude nine FTSE 100 CFOs who were not on the main board at the time. This has made a small difference (generally no more than +/- 1%) to some of the 2018 figures.

The 2018 report included these CFOs in the data. FTSE 250 CFOs who were not on the main board were excluded from the 2018 data.

Data on Audit chairs and Company Secretaries (Page 2) was extracted from BoardEx on 5 December 2019, in order to supplement the analysis of the data that was extracted originally.

Current CFO Role
In addition to their current role, BoardEx lists NED roles and other internal roles. Their current role was taken as starting when they were first appointed as CFO or equivalent at ED level. Where for example, they had taken on other internal roles after their appointment as CFO, whilst BoardEx separates them into distinct periods, our analysis treats them as a continuous role (so long as they held the same, main, CFO
role during that period).

Where a company had changed status (e.g. from private to public) or merged, it was treated as the same company. Where an individual had a previous role in a UK or international subsidiary of the company they currently worked for this was treated as being an internal appointment.

The company type (FTSE 100, 250 or other FTSE company) was based on the status of the company from which they moved at the time of their appointment. BoardEx provides 39 sector codes; these were grouped into the four broader sectors used in this report.