For many years the nomination committee has been considered the poor relation of the other principal board committees – not receiving the regulatory attention of the audit committee nor attracting the media profile of the remuneration committee. However, nomination committees are now in the firing line with a wide range of stakeholders from investors to activists to proxy advisors all looking to hold the committee to account for issues including board skills and diversity, performance, succession planning (executive and non-executive), independence, tenure, over-boarding and disclosure.

KPMG and Ridgeway Partners have looked at the composition of every nomination committee within the FTSE100 to get a sense of their levels of diversity across gender, age and nationality. We also looked at the average length of tenure and number of members per committee.

Many large firms are starting to address issues like unconscious bias in recruitment and a key step is often to ensure that those responsible for recruitment don’t all look and think the same. With 37 percent female representation across the FTSE100, nomination committees have higher levels of gender diversity than boards overall in the same group.

The composition of nomination committees in the FTSE 100 varies, with just over 40% of companies considering it a ‘whole board’ responsibility, with all non executives – and in a few cases the chief executive – being members of the committee. In the remainder the committee is a subgroup of the board. In both scenarios, a subset of a nomination committee may be formed to work with an executive search firm on a particular appointment. It is those involved in the shortlisting process who arguably have the greatest influence on how their boards are shaped, as they dictate who their colleagues will interview and choose between. Our advice to boards seeking to achieve best in class nomination committee composition is firstly to ensure regular refreshment of the committee, appointing in particular new board members, who will have valuable fresh perspectives on the strengths of the board. Secondly, we would encourage boards to ensure that consideration is given to the diversity of the committee, in terms of tenure, role and sector background, as well as across the full spectrum of diversity. A truly diverse nomination committee will be able both to judge effectively fit with the company and the role in question, as well as grasp how technology and society are changing and therefore what the leaders and boards of the future look like.” 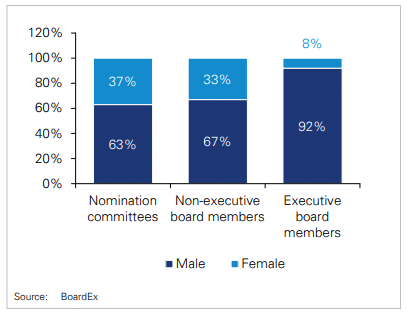 FTSE100 nomination committees have relatively high female representation with an average of 37 percent.

There are 24 FTSE100 companies that have nomination committees with female representation of 50 percent or more. The latest Hampton-Alexander Review records just two FTSE 100 boards with an equivalent female presence.

There is significant variance in the levels of female membership of nomination committees by sector. Construction has 49 percent female representation while the leisure industry lags behind with just 25 percent. Within technology, media, and telecommunications (TMT), half of the companies in the FTSE100 have 50 percent or more female representation on their nomination committees.

There’s more than one type of diversity
While nationality is only a proxy for international experience, it is notable that around a fifth of FTSE100 companies (22) have no non-UK nationals on their nomination committees. Almost two thirds (64 percent and 364 individuals) of committee members are UK nationals. In financial services this is as high as to 83 percent. The other most prevalent nationalities were American, French, Irish, German, Dutch, Australian, Spanish and Canadian. 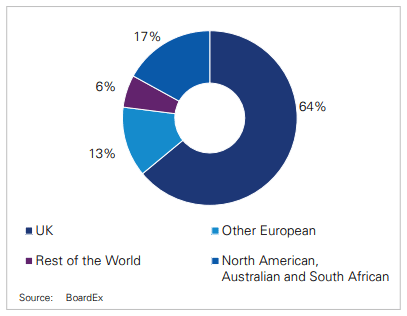 Globally, trade relations are fragile but for UK businesses unsure of their future relationship with Europe, building connections further afield could be crucial. So, the fact that a fifth of FTSE100 nomination committees are 100 percent British could be cause for concern. In a globalised world, those responsible for the most senior appointments in our most systemic businesses need a global outlook. 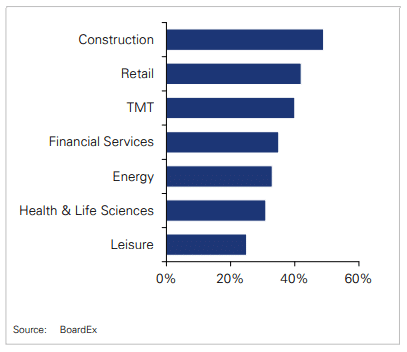 Generational divide
The average age of FTSE100 nomination committees is 60. The lowest committee mean age is 53 and the highest is 71. Given the pace of technological change, having board members with an understanding of new technology and the agility to manage the consequential opportunities and risks is vital to success. And an age diverse nomination committee – or at least a committee open to the strategic needs of the business and the advantages of more technology savvy directors – might be useful in challenging whether a potential appointee really has the cocktail of skills needed as a FTSE leader in today’s digital world. There are seven companies with the average age of nomination committee members of 55 or under. These committees also tend to include more women with an average of 50% percent female representation.

A closer look at Financial Services

Lower than average nationality diversity is prevalent across the whole sector with just 17 percent non-British representation against a FTSE100 average of 36 percent.

That financial services is behind the FTSE average on diversity goes some way towards explaining the overall diversity problem in our sector. There are lots of strands to the change that is needed in UK financial services, but having a workforce that reflects its end customers is core to everything. Every aspect of business transformation, whether it relates to personnel, technology or compliance, comes down to decisions made by people. If the people making the decisions all have the same experiences, values and attitudes then we will never achieve the scale of the change needed.

About the data
The data in this report is extracted from BoardEx, an advanced enterprise solution built to connect you with an exclusive network of global business leaders and decision makers. It considers all individuals in a FTSE100 nomination committee role as at 28 October 2019.